My 9 Favorite Things to do in Nepal

The first time I was in Nepal (all the way back in 2005), I spent most of my days sitting in Hanuman Durbar (Kathmandu Durbar Squire), reading a book and walking at the busy Thamel road. For so long I had heard about how wonderful and beautiful Nepal was, and there I was experiencing it! Over the years, I’ve been to the country a handful of times, exploring it more and more and getting a local taste through all my wonderful friends there.

After spending four weeks there last month, I wanted to share my favorite things to do and see in this magnificent historical monument, Mountain View, paradise cities, one horn rhinos, diversity of culture, and home of Lord Buddha: 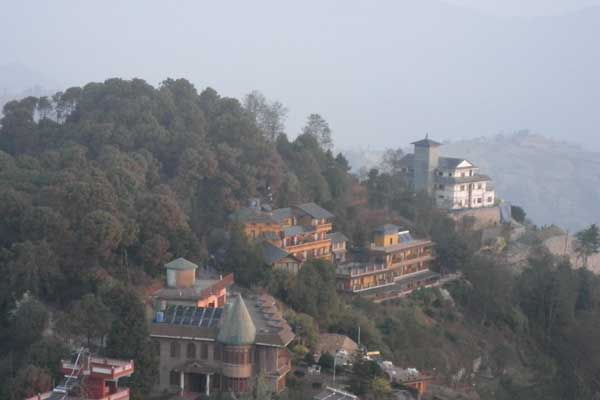 Great for travelers who want to experience the beauty and majesty of the Himalayas without any difficult physical activity, Nagarkot is best known for the views it offers of the mountains and the Kathmandu Valley. There are a variety of attractive hotels in every price range in Nagarkot, many of which are located within walking distance of the Nagarkot view tower, known as the best place to visit in Nepal to view the sun rising or sunset over the Himalayas.

Located about 5 km south of Kathmandu, on the southern side of the Bagmati River is Patan, a destination for connoisseurs of fine arts. Patan is filled with wood and stone carvings, metal statues, ornate architecture, including dozens of Buddhist and Hindu temples, and over 1200 monuments. The city is known for its rich tradition of arts and handicrafts and as the birthplace of master craftsmen and artists such as Arniko and Kuber Singh Shakya. With its multi-columned façade and gilded spires, the recently restored stone Krishna Temple is particularly striking, as is the recently restored Sundari Chowk.

Lumbini is the traditional birthplace of Siddhartha Gautama, Lord Buddha. With archeological finds that date back to around 5th /6th BC. According to Buddhist tradition, Maya Devi gave birth to the Buddha on her way to her parent's home in Devadaha in the month of May in the year 623 BC. Feeling the onset of labor pains, she grabbed hold of the branches of a shade tree and gave birth to Siddharta Gautama, the future Buddha. Buddhist tradition also has it that he walked immediately after his birth and took seven steps, under each of which a lotus flower bloomed. Set in the center of a small park designed by Japanese architect Kenzo Tange, the complex also features multiple monasteries, sacred ponds, meditation centers and cultural facilities.

The park is situated in south central Nepal, covering 932 sq. km. in the subtropical lowlands of the inner Terai. The area comprising the Tikauli forest-from Rapti river to the foothills of the Mahabharat-extending over an area of 175 sq.km was declared Mahendra Mriga Kunj (Mahendra Deer Park) by the late King Mahendra in 1959. In 1963, the area south of Rapti River was demarcated as a rhinoceros sanctuary. The area was gazetted as the country's first national park in 1973, recognizing its unique ecosystems of international significance. UNESCO declared RCNP a World Heritage Site in 1984. One of the best wildlife-viewing destinations in Asia offers needed sanctuary for rare and endangered species like the Bengal tiger and one-horned rhinoceros. The chance for a close-up look at exotic wildlife, including elephants, leopards, Indian bison, rhinoceros and sloth bears, is the park’s greatest attraction. In addition to jeep tours, visitors can experience the park through jungle treks, elephant rides and canoe rides. Luxury lodging is available at the edge of the park, and the nearby village of Sauraha offers affordable accommodation.

The Annapurna sanctuary in northwest Nepal offers hikers an outdoor experience nonpareil. The dramatic mountain scenery is the reason for doing Annapurna Base Camp or sanctuary treks. Standing in the middle of the sanctuary, surrounding by towering snowy peak, ranging from 5000m to 8000m 1665000ft to 26000ft, is a truly awe-inspiring experience. The trek also passes by cultural village Ghandruk which interesting to sock the culture. Starting from Pokhara, the journey takes about 8 to 12 days through the beautiful view from Ghorepani Poon Hill. It’s one of worlds' most popular moderate trekking in Nepal with lodges and tea stops at hourly intervals or less, until the base Camp at least. 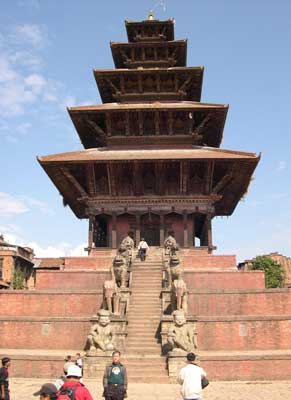 Located about 20 km east of Kathmandu in the Kathmandu Valley, Bhaktapur is known as the 'City of Devotees', the 'City of Culture', the 'Living Heritage', and 'Nepal's Cultural Gem'. Bhaktapur experienced a fair share of damage during the 25th April 2015 earthquakes. Bhaktapur is filled with monuments, most terra-cotta with carved wood columns, palaces and temples with elaborate carvings, gilded roofs, and open courtyards. The city is dotted with pagodas and religious shrines.

With its tranquil lakes, verdant shorelines and mountain views, Pokhara is a popular alternative destination for travelers from around the world. Known as the gateway to the Annapurna region in northwest Nepal, the lakeside city offers respite to weary hikers, and provides opportunities for outdoor adventures too, ranging from leisurely paddle-boat rides to white-water rafting. The largest of Pokharas among three lakes, Phewa Lake is lined with luxury hotels, restaurants, bars and shops. The lake also features an island with a temple dedicated to the goddess Barahi Bhagwati where ceremonies are held nearly every weekend. There are also possible to do everyday paragliding, Bungee Jump, Zip flying and Alta flight. 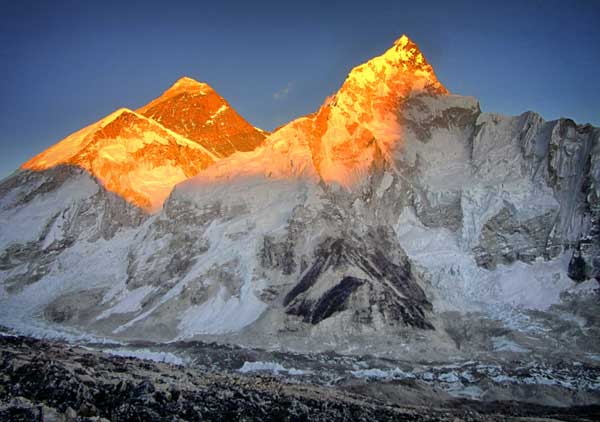 The Everest Region located in northeastern Nepal. Each year, the determination to trek to the summit of Mt. Everest brings thousands of adventurous travelers to Everest region. The journey begins at the Lukla airstrip where a clear two-lane trail eventually leads hikers to Everest Base Camp or dive all the way to Jiri or Salleri. If treks start from Jiri takes 6 days to reach Lukla and trek start from Salleri take two days. Khumbu is home to the Sherpa village of Namche Bazaar where most expeditions to the mountainous peaks are staged. The country’s foremost Buddhist center, the Tengboche Monastery, is located in the on the way to base camp. There’s a variety of comfortable accommodations available.

Nepal’s historical and cultural capital, Kathmandu is the place where most adventures in Nepal begin, as all flights from overseas land in the city’s airport. A crowded metropolis of more than 1.5 million inhabitants, Kathmandu is a chaotic mix of tourist shops, trekking agencies, hotels, restaurants, religious sites and artisan workshops. Kathmandu famous Durbar Square is still undergoing restoration after the 25th April earthquakes, but there are many intact sites well worth exploring. One of the attractions of any visit to Nepal is the chance to walk the streets of Kathmandu, which presents a fascinating mosaic of shops, cafes and restaurants, food markets and street vendors, as well as a bewildering array of colorful temples and shrines of both the Buddhist and Hindu religions.